This PIP appeal in North London needed Pebbles to help

North London living L came to me in September 2019 with a PIP appeal assistance request regarding a PIP decision made 15 months before.

She had scored 8 points for daily living and 4 for mobility, so just enough for an award of standard rate of the daily living component. Her problems are a mix of physical and mental health and after we talked about how these affected her in the context of the PIP criteria, my advice was that she should have had awards of the enhanced rate of both components. The PIP appeal was lodged online three days later and we started thinking about where evidence would come from to support our view. The Department’s appeal papers contained GP notes and we added a witness statement from L’s sister and mental health notes. We went through the report put together by the physiotherapist employed by ATOS Healthcare and one thing that struck us was how little had been written in certain areas. The physiotherapist seemed to be out of her depth with problems that one service provider described as too complex for them to help with. In one section of the report, L was described as being withdrawn and a few lines further on, not being withdrawn. You don't have to be with L very long to be surprised at the physiotherapist assessing her as not being agitated or tense; at least she was described as walking at a very slow pace and appearing to be in discomfort, so it could have been worse.

Traumatic life events can knock anyone off course but L has been three such events and to her credit, shows signs of getting back on track. I knew that it was going to be more than difficult for her on the day the hearing and I was concerned at not being able to reach her on the phone the day before. When we spoke on the day, it was all I could do to get L to agree to come to the waiting room at the tribunal venue; she did not expect to be able to come into the room itself. 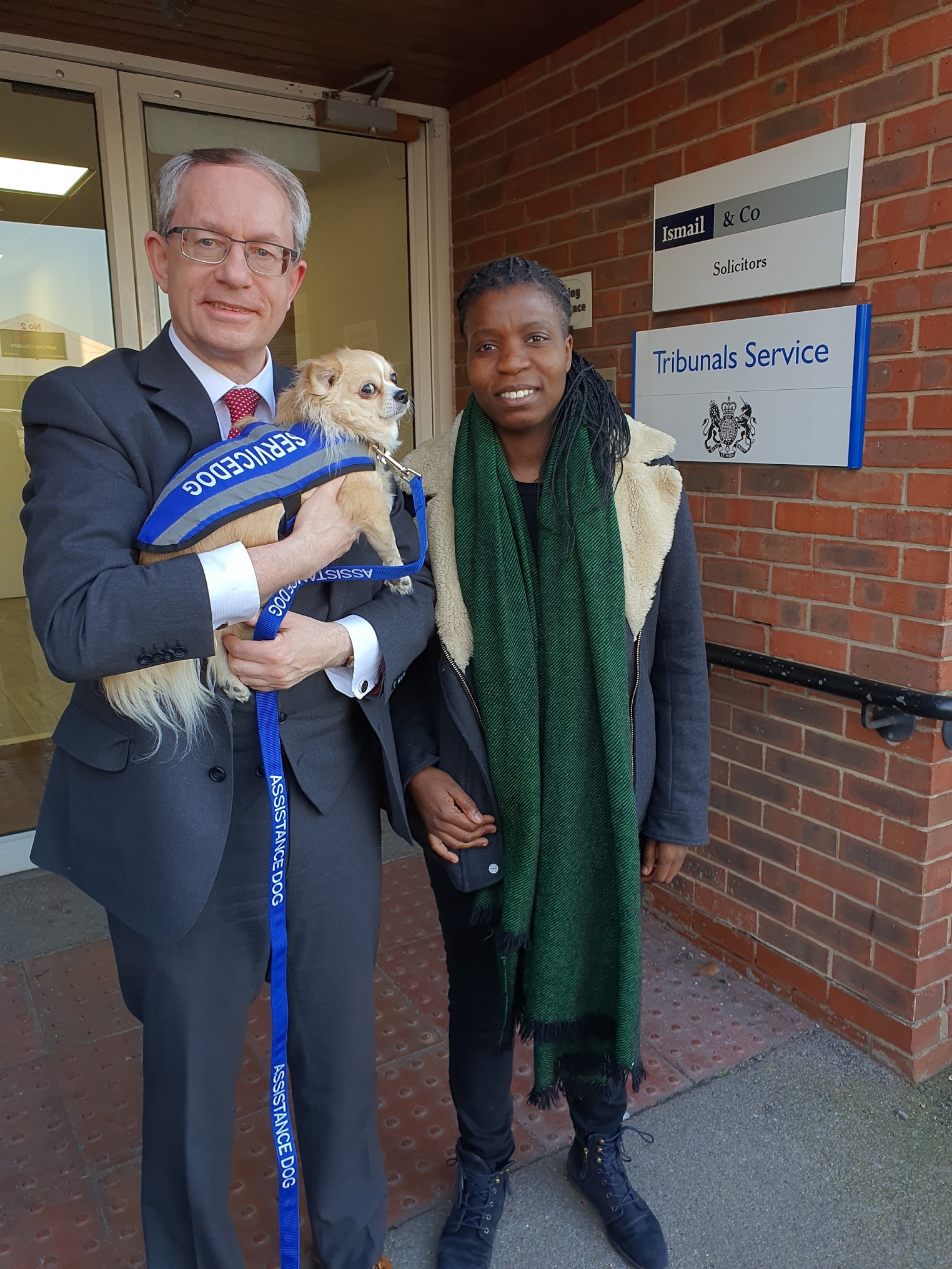 The hearing was in North London, over three hours from our base, but with the start time of 3.00, it could be done in a day. L messaged on the day of the hearing to say that she really couldn't come, not being able to cope with the idea of seeing people who knew what she had experienced. It helped that my partner was with me and that she would be able to wait with her while the hearing took place. Being told that we had our chihuahua, Pebbles, with us and would bring her into the tribunal venue clinched it. L said that would be calming. We have always thought that Pebbles would make a great therapy dog. One or two clients have met her back at the office that this was the first time that she had been into a tribunal venue. From the reaction of the security guard and tribunal clerk, they don't get too many dogs in there.

My hope was that once she got to know Pebbles, L would feel able to come into the tribunal room with Pebbles on her lap. It would be up to the judge but since part of the overriding principle enshrined in the law is about enabling claimants to take part in the proceedings, I was hopeful that a judge would make an exception. Pebbles behaved impeccably and proved to be a great comfort but L did not feel able to go further than the waiting room. Her sister, the author of a witness statement, was happy to come in. We went into the tribunal room and got settled. The judge did the usual introductions of the panel members and explained that having been through what she described as our detailed and helpful submission, together with the evidence in the appeal papers, they had been able to decide the appeal before we went in. The three panel members had the appeal papers two weeks or more before the hearing, but it is not until the day that they meet and can consider them together. The written decision had already been typed, so full marks to the tribunal clerk who evidently knew this but had given nothing away cup. They had taken L from 8 to 12 points and had added 10 points for mobility as well, with a four year award. On a personal note, I was pleased that they had accepted our written submission about Engaging with other people and had added the 4 points here, for the need for ‘social support’, applying a Supreme Court decision from May 2019 that we had included and made reference to in that submission. The judge asked me to explain to L that the Upper Tribunal allows them to stop counting when they get to the 12 points needed for an award of the enhanced rate, and wanted her to know that this did not mean that they were dismissing her claim for additional points.

We were in and out of the hearing in about three minutes and you can imagine L's relief. Her sister said that she was afraid of dogs and had never touched one before, but she enjoyed making a fuss of Pebbles. I passed on the judge’s comments and we emerged into the North London sunshine for a photograph. My hope is that the increased benefit will make a difference in terms of transport to therapy as well as taking some pressure off with everyday expenses. L explained that there is something wrong with a recent ESA decision so it looks as if there will be another file to open, and the team has a new member, Pebbles the chihuahua.